Melville (and Hawthorne!) and Scammon, again!

No doubt this recurrence of such an unapologetic misfit in my daily thoughts comes as a result of staying in a mind-bogglingly small California town where everybody is overly involved in everybody else's business, whether they're Chamber of Commerce types or the local matrons whose faces have been made not-quite-tantalizingly puffy with Restylane. 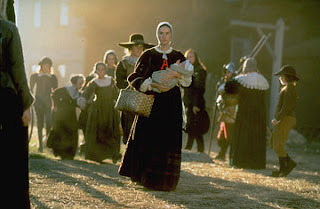 But it also happens to be the very same small town where I first read The Scarlet Letter in high school, before anyone knew what Restylane was. (Imagine such an innocent era!) That first reading was under the tutelage of God's gift to English students, Mr. Nicholson. (No doubt Mr. N. remains the first crush of many a book-besotted girl.)

Only someone as secretly subversive as Hawthorne could write: "The scarlet letter was her passport into regions where other women dared not tread. Shame! Despair! Solitude! These had been her teachers!" and manage to get it onto required reading lists for late 20th-century, sophomore English classes. Maybe if we hadn't taken Hawthorne's worship of the sensuous and self-possessed Hester so seriously, we would all have married obstetricians with sturdy practices and would currently be enjoying our very respectable alimony settlements somewhere in the Caribbean.

Throughout the process of working on Garibaldi and The Farallon Egg War, I've often thought of Melville's relationship with Nathaniel Hawthorne, usually in context of the reports of Hawthorne's lack of enthusiasm for Melville's first draft of Moby-Dick, a novel that would eventually (given much time and the assistance of some meddling French critics) eclipse Hawthorne's own masterpiece, The Scarlet Letter.

Alfred Kazin's introduction to Hawthorne's masterpiece begins: "Why is there no opera of The Scarlet Letter?" (Why indeed, given that there's recently been a whole opera made out of Melville's Moby-Dick, a tale that would, on its face, be far more difficult to stage, if only because of the length of the harpoons, let alone the difficulty in casting a white whale?) Kazin writes that Hawthorne claimed to have discovered inspiration for his tragic novel (America's first proper tragedy which put us on the literary map!) while working in the Customs House...

...the Customs House having been the employer, of somewhat last resort, for two real-life characters who play a role in the Farallon Egg Wars: whaler-turned-marine-mammalogist Charles Melville Scammon, and the mostly ill-fated keeper of the Farallon lighthouse, Amos Clift. (As with all Customs House appointments, the apportionment of jobs was extremely political, particularly for Clift and Hawthorne.)

It was while working in the Customs House that Hawthorne claimed to have discovered not only the actual case on which The Scarlet Letter was based, but to have discovered, in the evidence bin, or the 19th-century version thereof, a worn and faded remnant of the actual scarlet letter.

The worn and faded remnant of one actual scarlet letter? That's like finding the shroud of Turin in a Goodwill box, or one of Judy Garland's ruby slippers at the MTA's lost-and-found locker.

"(Hawthorne) was fortunate in having as his closest friends Bowdoin classmates who were influential in the Democratic Party. One of them was Franklin Pierce, who in 1852 became fourteenth president of the United States. In 1846 Hawthorne's party friends secured him appointment as Surveyor of Salem, his native town. He needed to show himself in the Custom House only a few morning hours before getting back to his writing. In 1848, however, the Mexican war hero Zachary Taylor, running as a Whig, was elected President, and when he assumed office in 1849, Hawthorne was replaced.

"This was devastating. Friends - including Longfellow and Lowell - had to raise a subscription for his support. Hawthorne took his dismissal as a summons to begin The Scarlet Letter, long in his mind. The central situation - a young woman punished by the Puritan theocracy for adultery by having to show the letter A on her dress - Hawthorne claimed to have discovered at the Salem Custom House in a file of old papers forgotten at the outbreak of the American Revolution by Loyalists fleeing to Nova Scotia. In the preface to his novel, The Custom-House, Hawthorne pictured himself brooding on the ancient story in the same place where he had to associate with fossilized political hacks.

Posted by eva chrysanthe at 5:09 PM