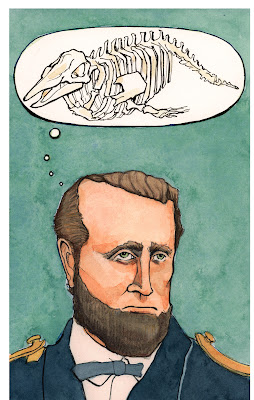 Last winter I was given the opportunity to lecture at San Francisco's Maritime Museum Library on one of the real-life men who played a role in the 1863 Farallon Egg War: Charles Melville Scammon.

Scammon was the premier whaler on the West Coast, and the man who very nearly made the gray whale extinct.  He was also, and paradoxically, the man who wrote "THE" landmark book on marine mammalogy in the 19th century. He entered the egg war's fray only because he'd taken a job with the customs office patrolling the waters of the Bay and beyond.  Being a boat cop wasn't exactly his life's vocation but it was steady work for a guy working on a book project who had a family to support.

Scammon is a character whose life is so fascinating and whose talents diverged in so many different directions that he really deserves his own book. Separately, I'd always wondered about the middle name - was there any family connection to Herman Melville, the author of the American masterpiece Moby-Dick, or, The Whale?

Beside the name, there was another significant similarity:  Both men, with notable early successes under their belts, had each written a landmark book that would only be appreciated after their deaths.  And the process of writing those books had exacted a significant financial and spiritual toll on their individual lives. Failure was not just a major theme in Moby-Dick, it's a major theme in the later lives of both Scammon and Herman Melville. 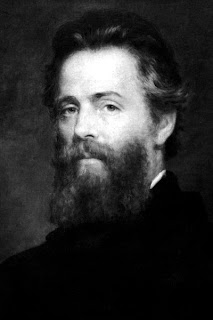 Shortly before I gave the presentation at The Maritime Museum Library, I contacted the Melville Society in New York as a last-ditch effort to find a connection between the two men. I was pretty sure no one at the Melville Society would get back to me - after all, THEY are Melvillists (Herman Melvillists, at that!) and I am... a cartoonist. At the time I knew that Herman Melvill was originally a Melvill (and not a Melville), and that the shared name may not imply any family connection whatsoever, but I thought it was worth asking.

Within an hour, I had received several responses from the board at The Melville Society. Here are excerpts of some of the informal, but fascinating, responses:

"Thanks very much for this request. I learned about (Scammon) a few years ago when reading Dick Russell’s book Eye of the Whale, which documents both Scammon’s slaughter of whales in the birthing lagoons in Baja Mexico in the mid-1850s and his subsequent work as a natural biologist giving us our first comprehensive scientific view of the gray whale.  The change he made from a killer of whales to a person determined to understand and celebrate them parallels to some degree the change of consciousness Ishmael goes though in the process of narrating Moby-Dick as well as the evolution American and world culture toward the whale ever since."

Another Melvillist wrote back more specifically on the geneology:

"As far as I know Charles is not related directly, but chances are there is a link somehow. Since Charles was born in 1825, well before Herman became famous, we can rule out the possibility that he was named after Herman.  This actually happened a couple times later in the century, usually former shipmates recalling Herman, named a child after him.  Melville is French but Scots, and HM's father, uncle, and grandfather were, in their day, fascinated by the prospect that the Melvill's (without the e) were related to the Earl of Leven and Melville residing in Fife, north of Edinburgh.  And indeed they were, so one way to pursue this is to follow the assumption that Charles might also be related to the Scots lineage.  Robert Dundas, Viscount Melville, stands atop a column in Edinburgh, son (I think) of a hero of Culloden, so it was a name that had some history attached to it."

And then more from the first Melvillist:

"I would be FASCINATED to know whether Scammon knew anything about Moby-Dick (whether he was related to Herman or not).  The fact that he was a whaler a few years after the book came out in 1851 makes it possible.   If it were the case, then one wonders if Ishmael’s evolving attitude toward the whale within the book affected Scammon’s own conscious evolution or not.

"What was it that got you thinking of Scammon and Melville together?  I was excited to see your question because of the accidental way I had come to relate Scammon and Guert Gansevoort with each other.   I am guessing you already know The Eye of the Whale.  If not, Russell himself uses Melville, as well as Scammon, as a touchstone through that book.

"One more thing.  Herman Melville was in San Francisco for several weeks, at least, in 1860.  I don’t remember seeing Scammon among people he is known to have met then, but maybe there are some mutual acquaintances whose names a person who knows about Scammon would recognize.  The place to start on that would be the appropriate chapter in volume 2 of Hershel Parker’s two-volume biography of Melville."

I'll post later on one of the characters who seems to be the link between Scammon and Herman Melville.  Later, because that man's life is surely as interesting as the great adventurers and writers Herman Melville and Charles Scammon.

One more note:  Last week, leaving the C.V. Starr East Asian Library at UC Berkeley where I was researching background scenes for Ah Toy (another real-life character who appears in Garibaldi and The Farallon Egg War), I ran into Jon Von Kowallis, the author of The Lyrical Lu Xun, who had quite a bit to say about the environment Ah Toy came out of in 19th-century China. But more about that later... 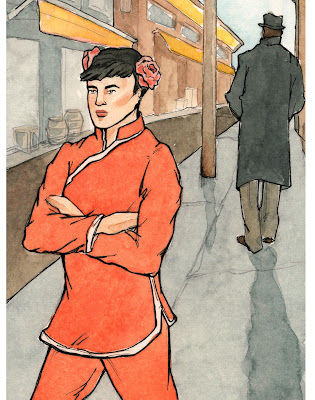 Ah Toy, by eva
Posted by eva chrysanthe at 3:55 PM