In October, I did an interview with NPR's legendary producer, Nikki Silva.  I'm hoping to make the final cut, but it was exciting either way!  Silva suggested I update the blog. I'd been re-working the graphic novel significantly, with some epistolary pages penned by the Jesuit-schooled Mei, who becomes Ah Toy's accountant in San Francisco. Here are some of the (raw) sketches from Mei's letter to the revolutionary Giuseppe Garibaldi, who, along with his wife Anita, was at that time an object of global fascination and admiration: 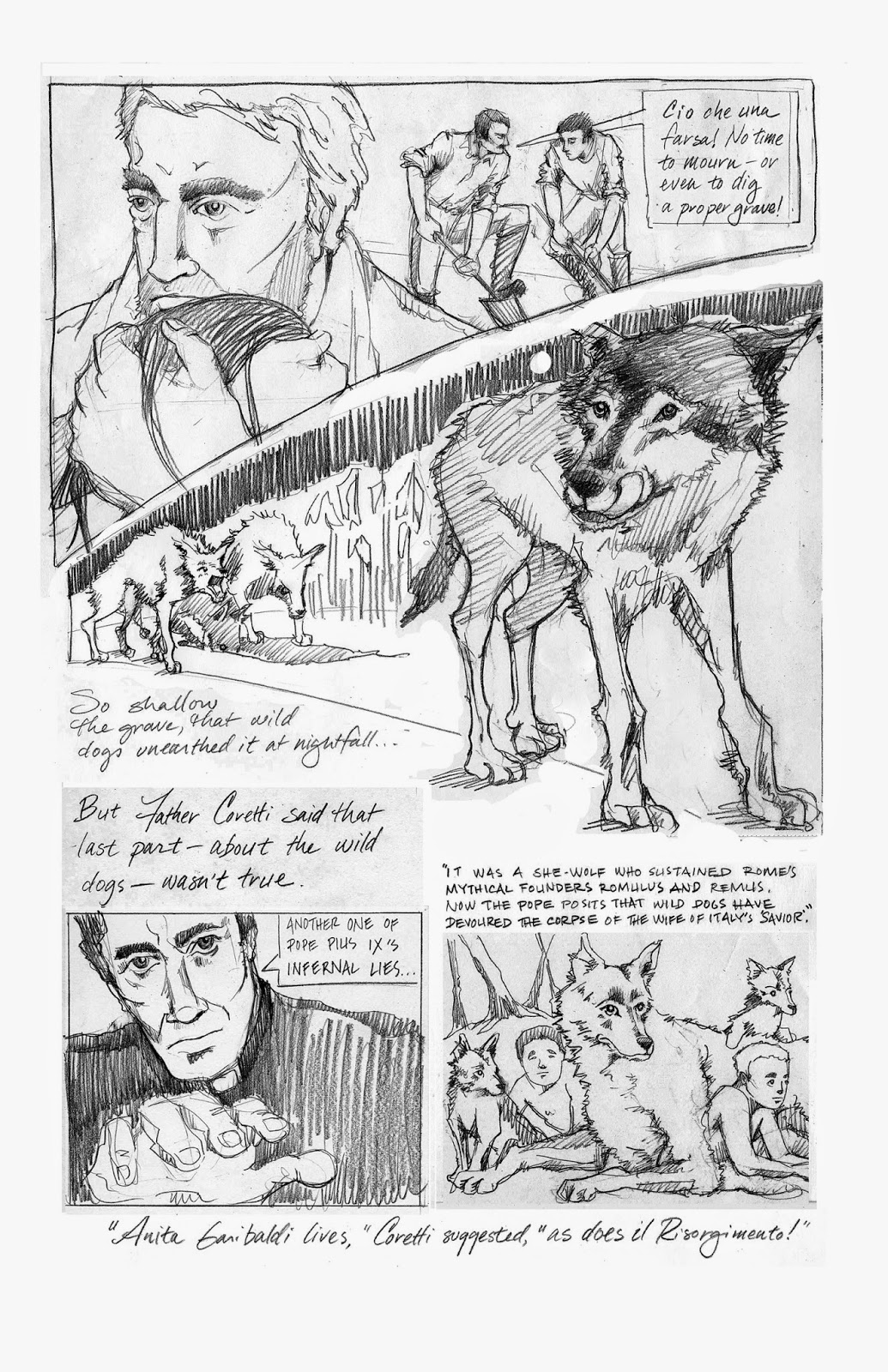 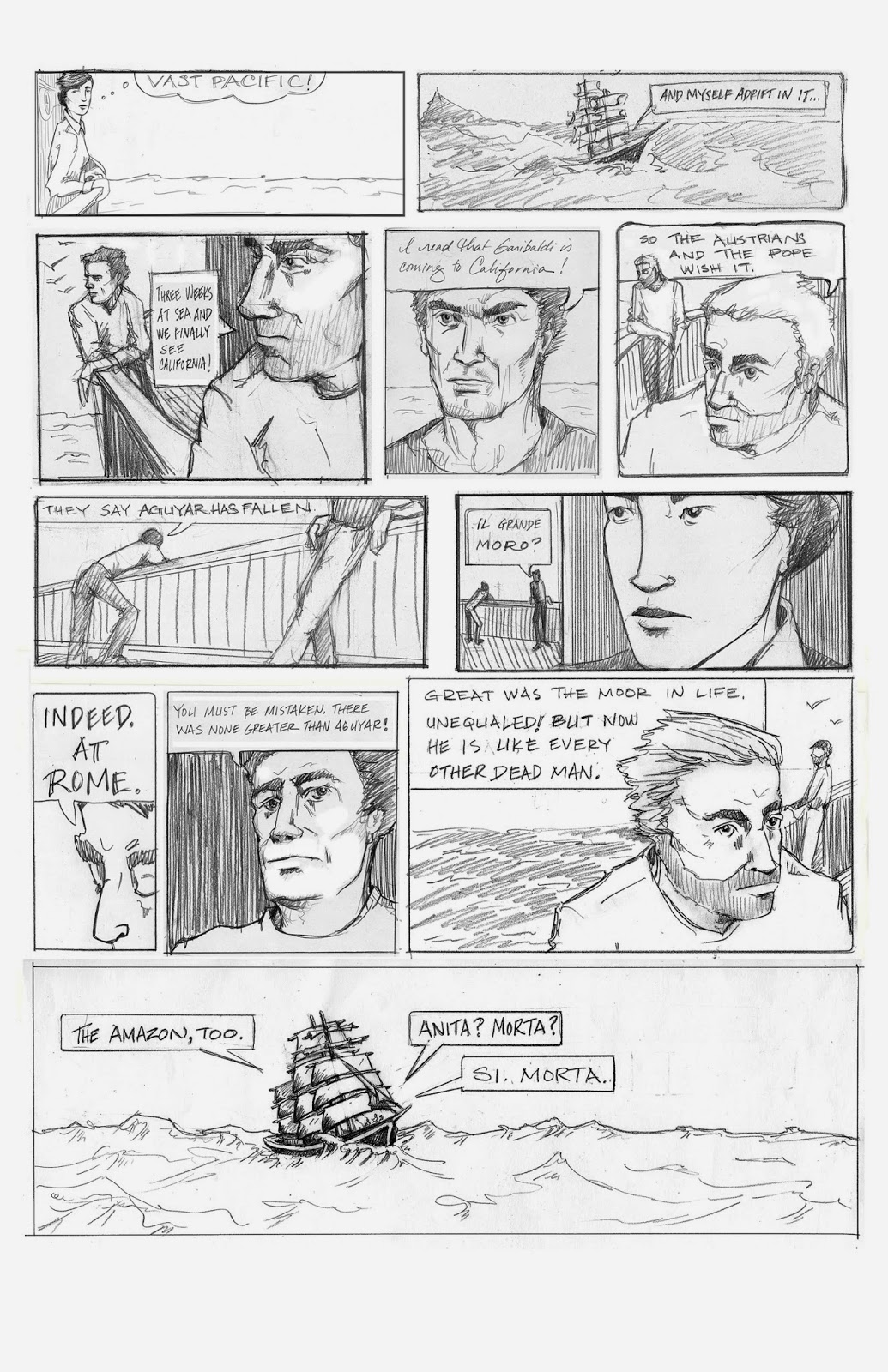 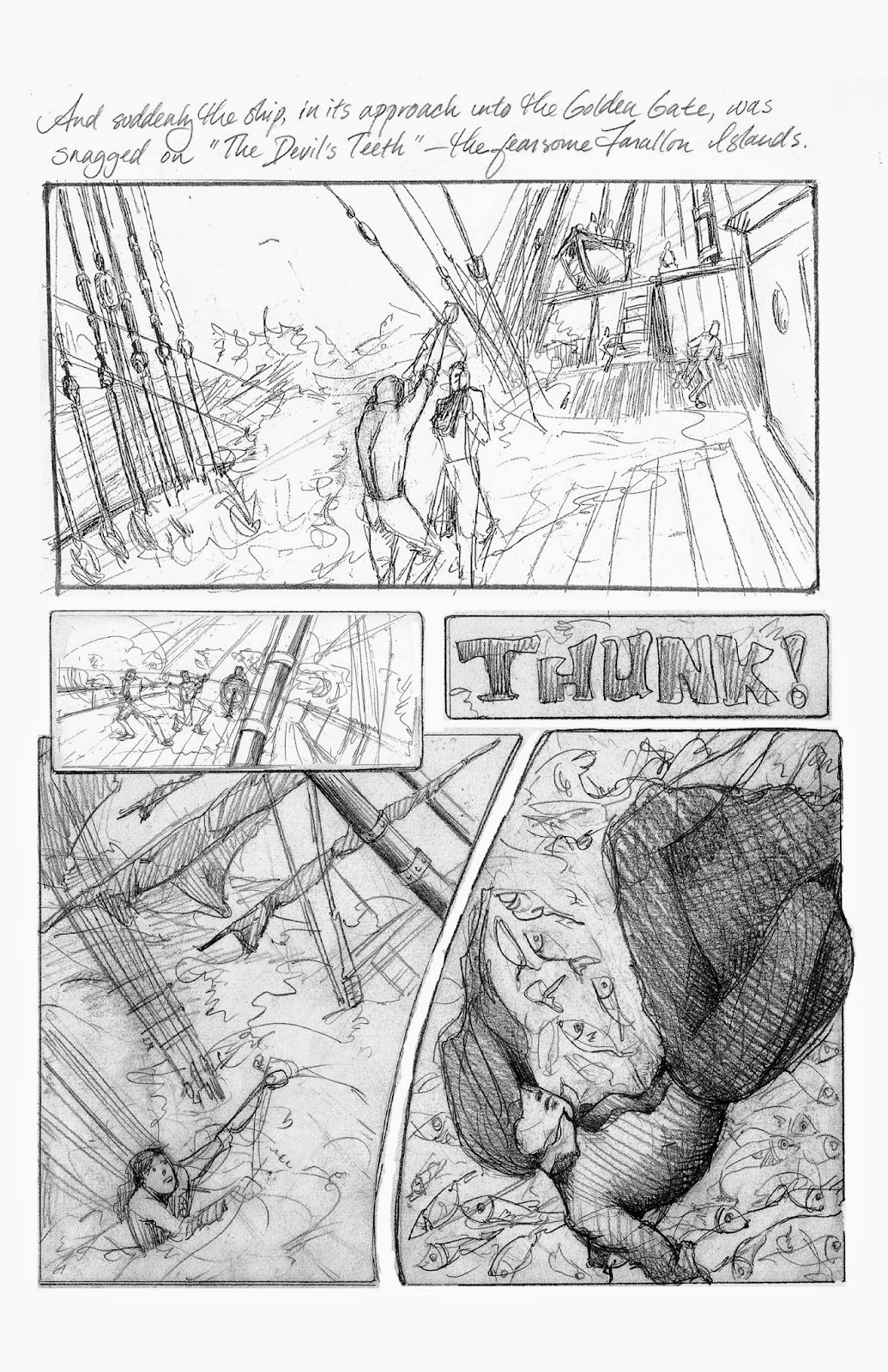 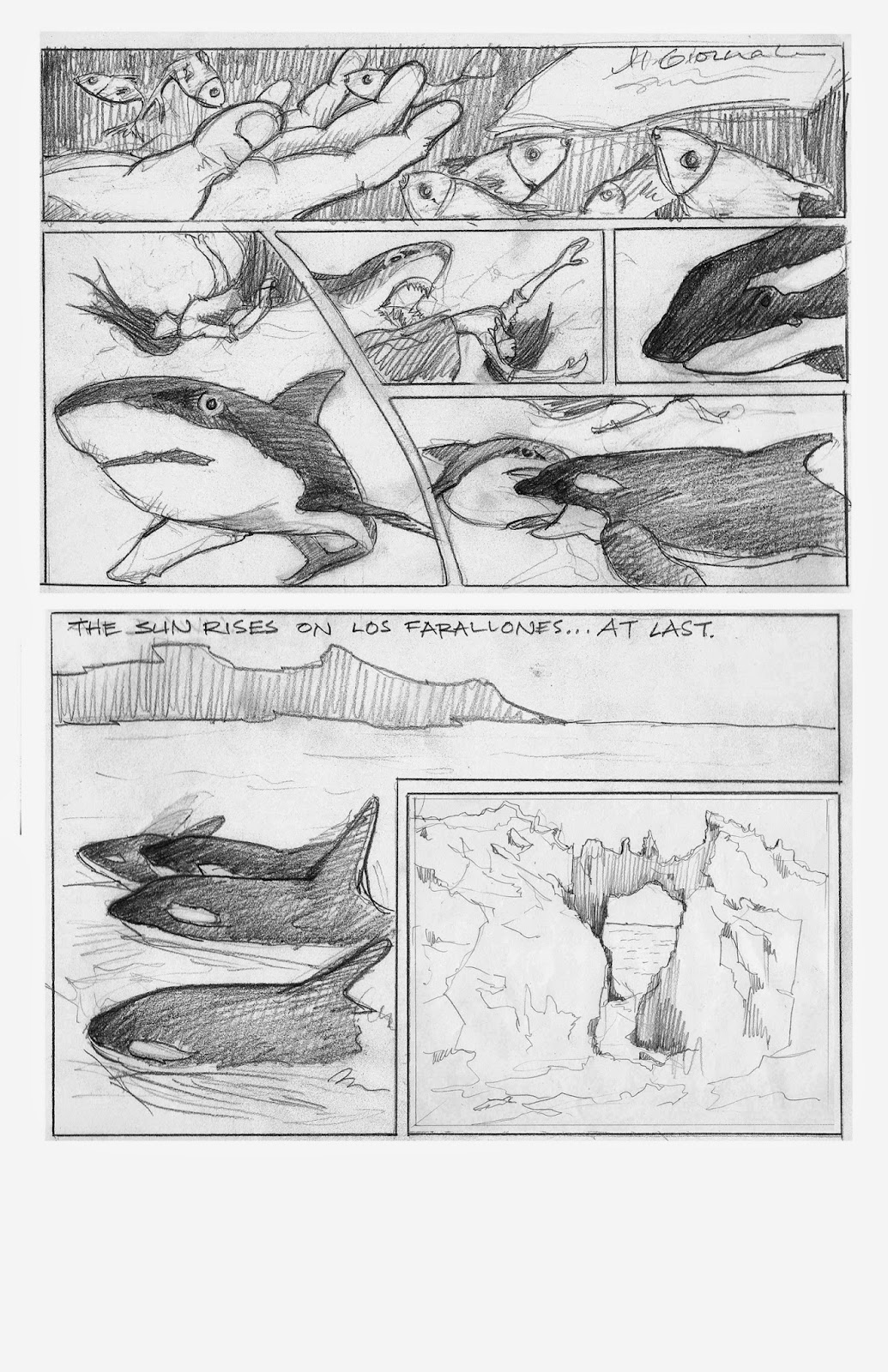 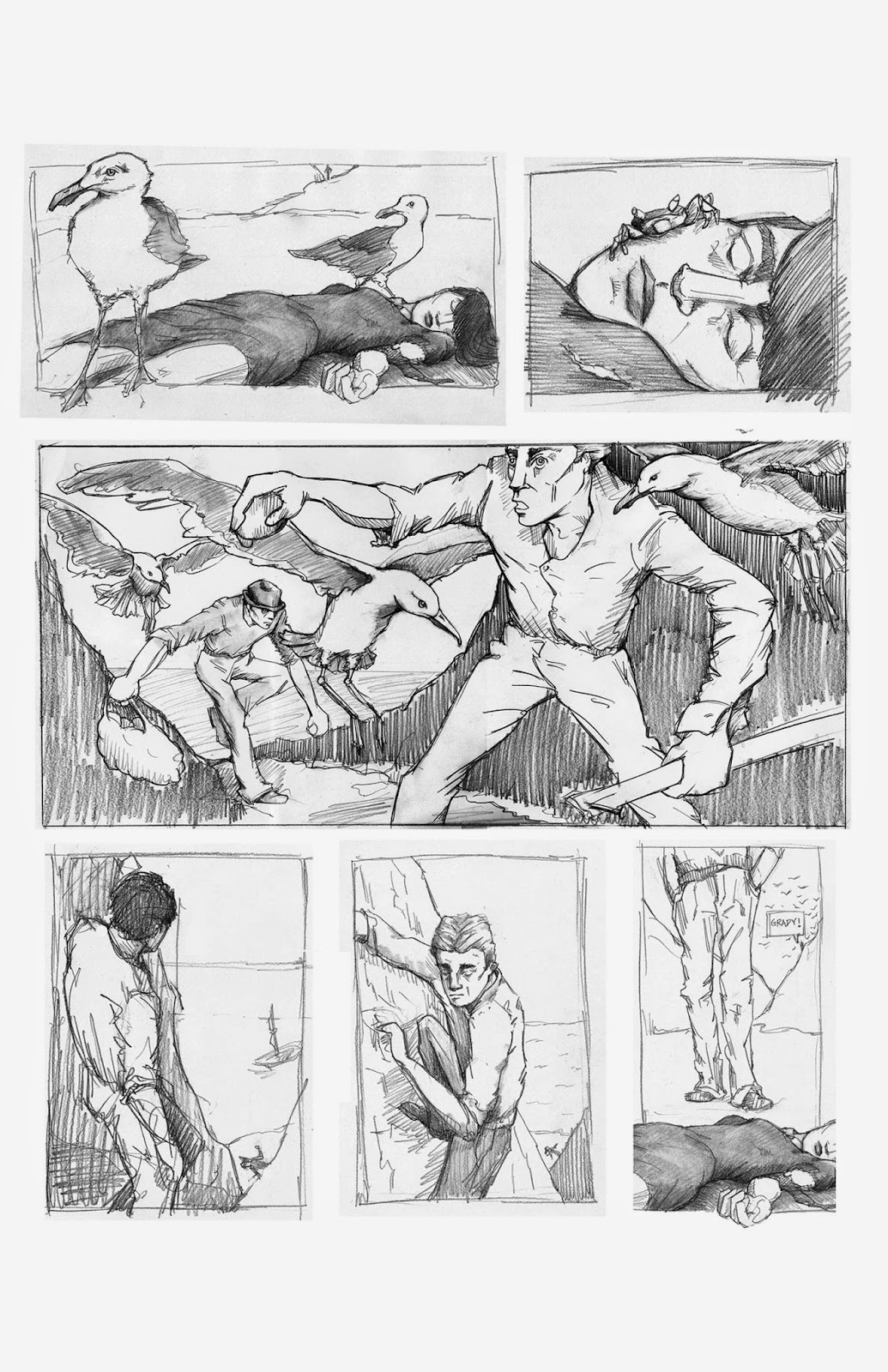 And thus Mei, washed ashore on Los Farallones, is retrieved by one of the egg poachers. She will soon be brought to Ah Toy's wretched salon, where she will exercise her considerable moral suasion on the hopelessly mercenary Ah Toy.  Wretched Greed vs. Morality - in 1850's San Francisco, as today, no one knows which will prevail.  But don't be fooled by her placid, bookish demeanor, Mei's a true believer, and in her own patient way, a real fighter. 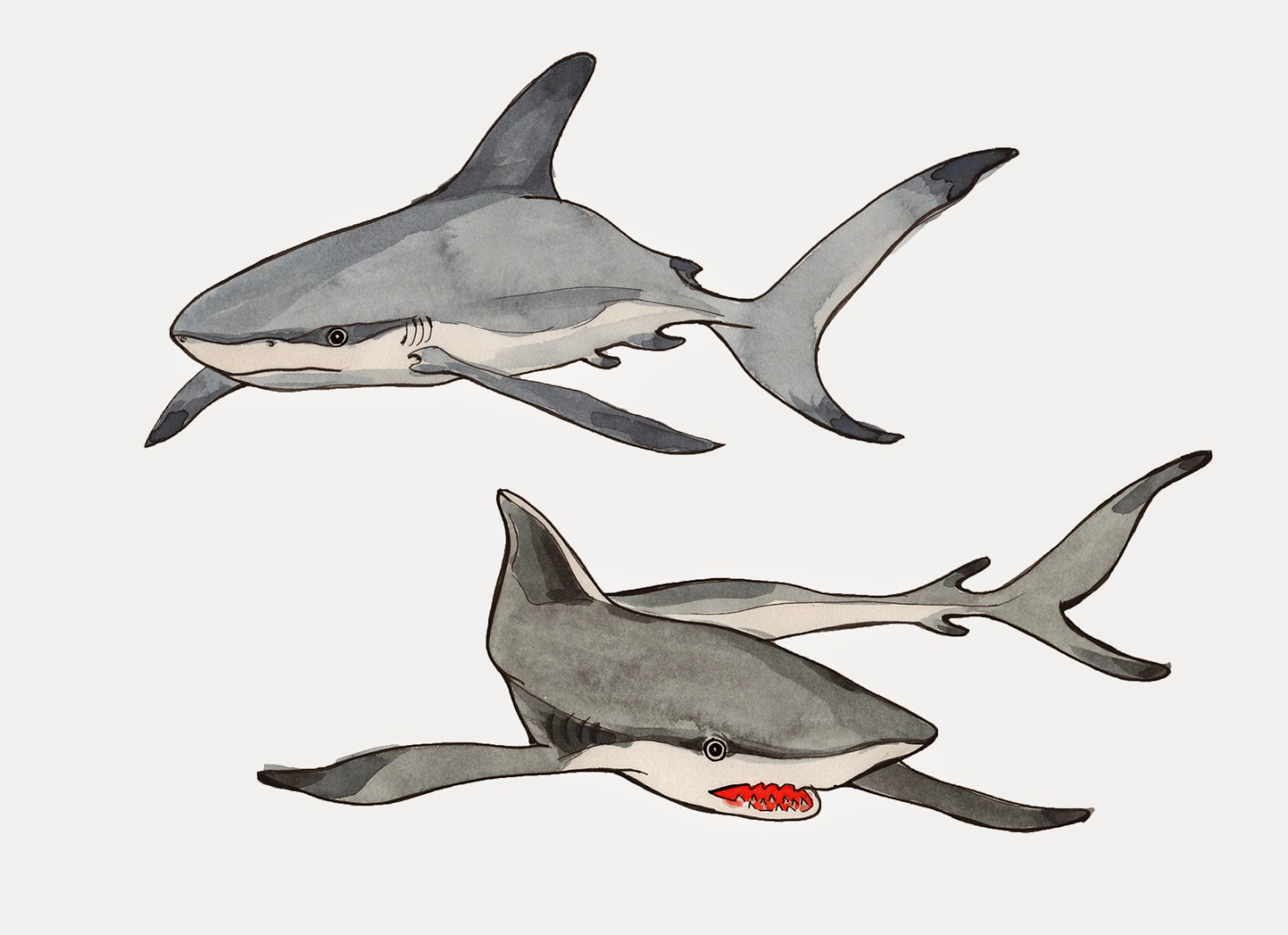 Farallon "Fun Fact": Between 1946 and 1970, the Atomic Energy Commission took it upon themselves to "store", or more accurately, to "dump", 47,500 55-gallon drums of radioactive waste in the waters surrounding our Farallon Islands. But don't worry, the AEC assures us that the radioactive waste wasn't super-extra-radioactive, just kinda-sorta-regular radioactive.

The best detail: when some of the sealed containers wouldn't sink, the AEC workers shot at the containers from the boat... so that they would sink. You and I can't get jobs that stupid; we are under-qualified.

The radiation presents the sci-fi premise of radioactive Great White Farallon Sharks. Of course, in my limited realm of imagination, the pernicious effects of radiation don't result in more savage Great White Sharks, but rather, "cuter, fluffier" sharks as I have watercolored above. Lamentably, the action comic seems ever beyond my feminine grasp. At this point in life, I might just learn to live with it.
Posted by eva chrysanthe at 10:19 AM 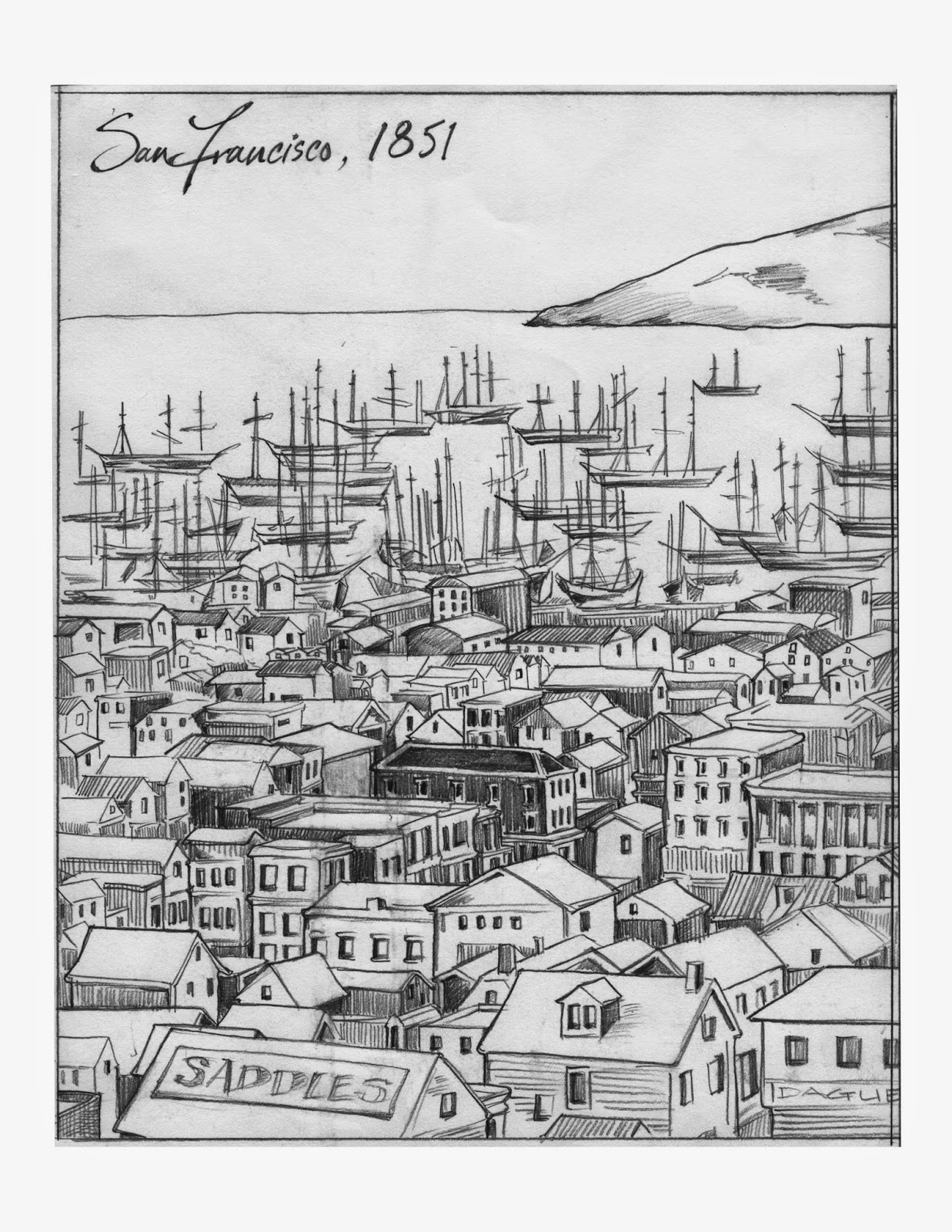 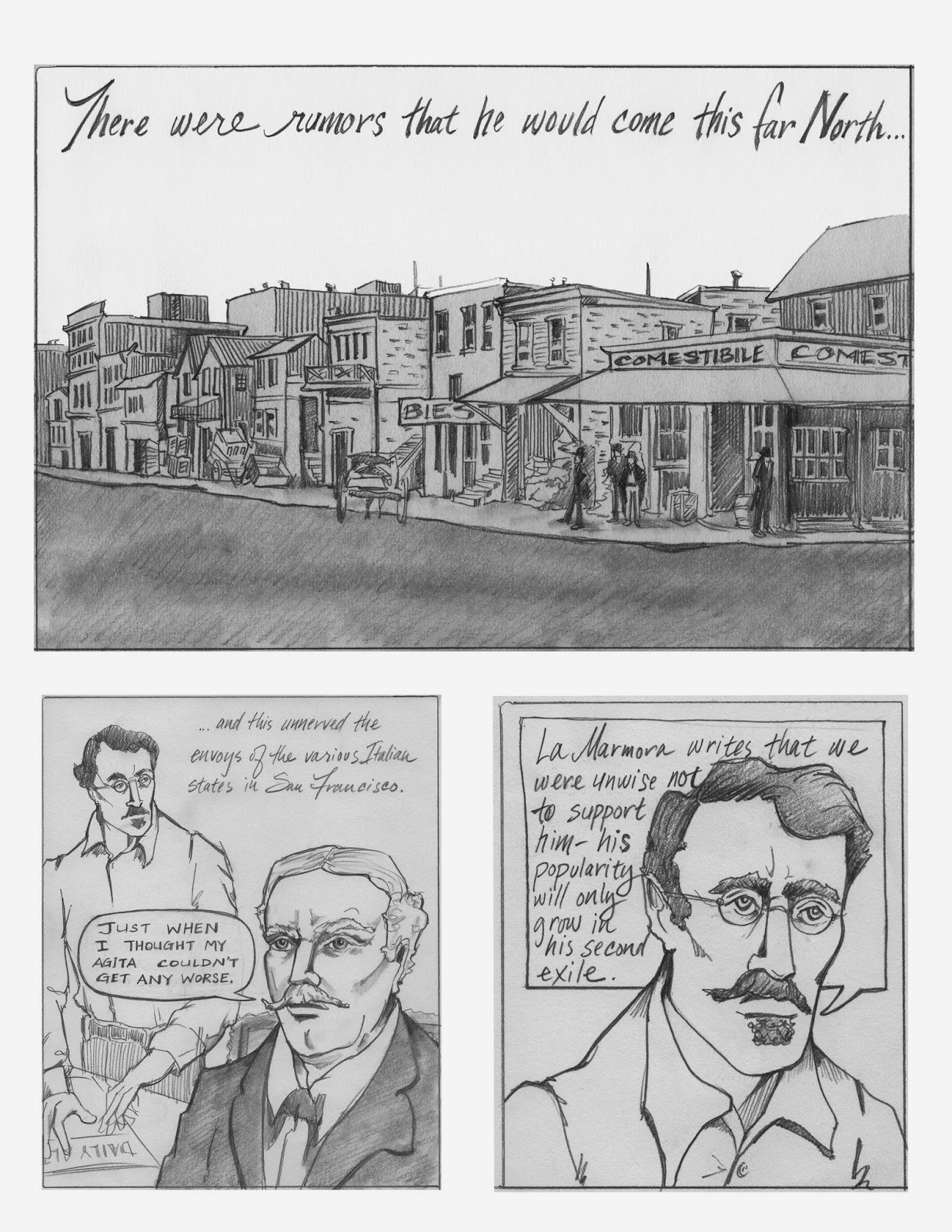 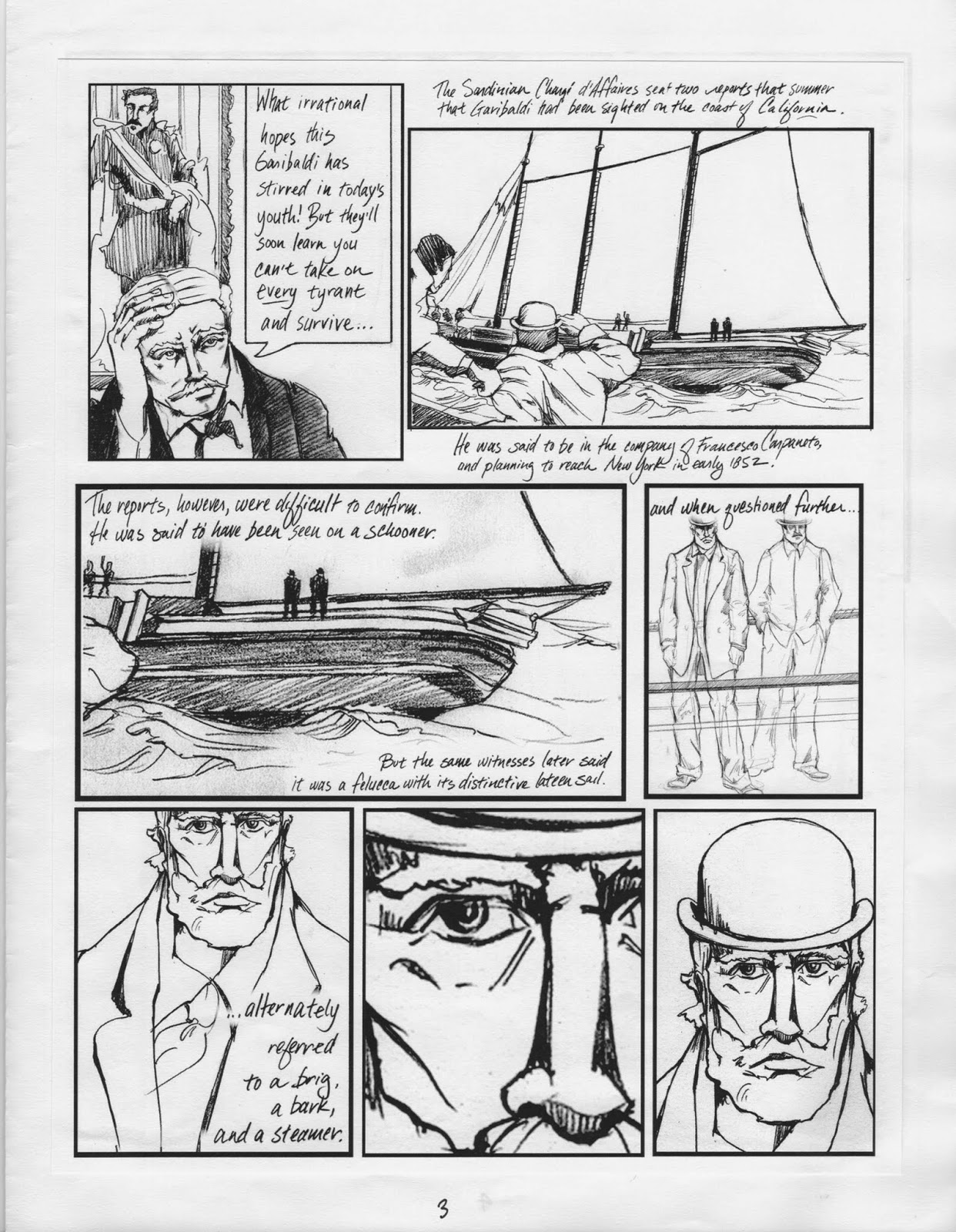 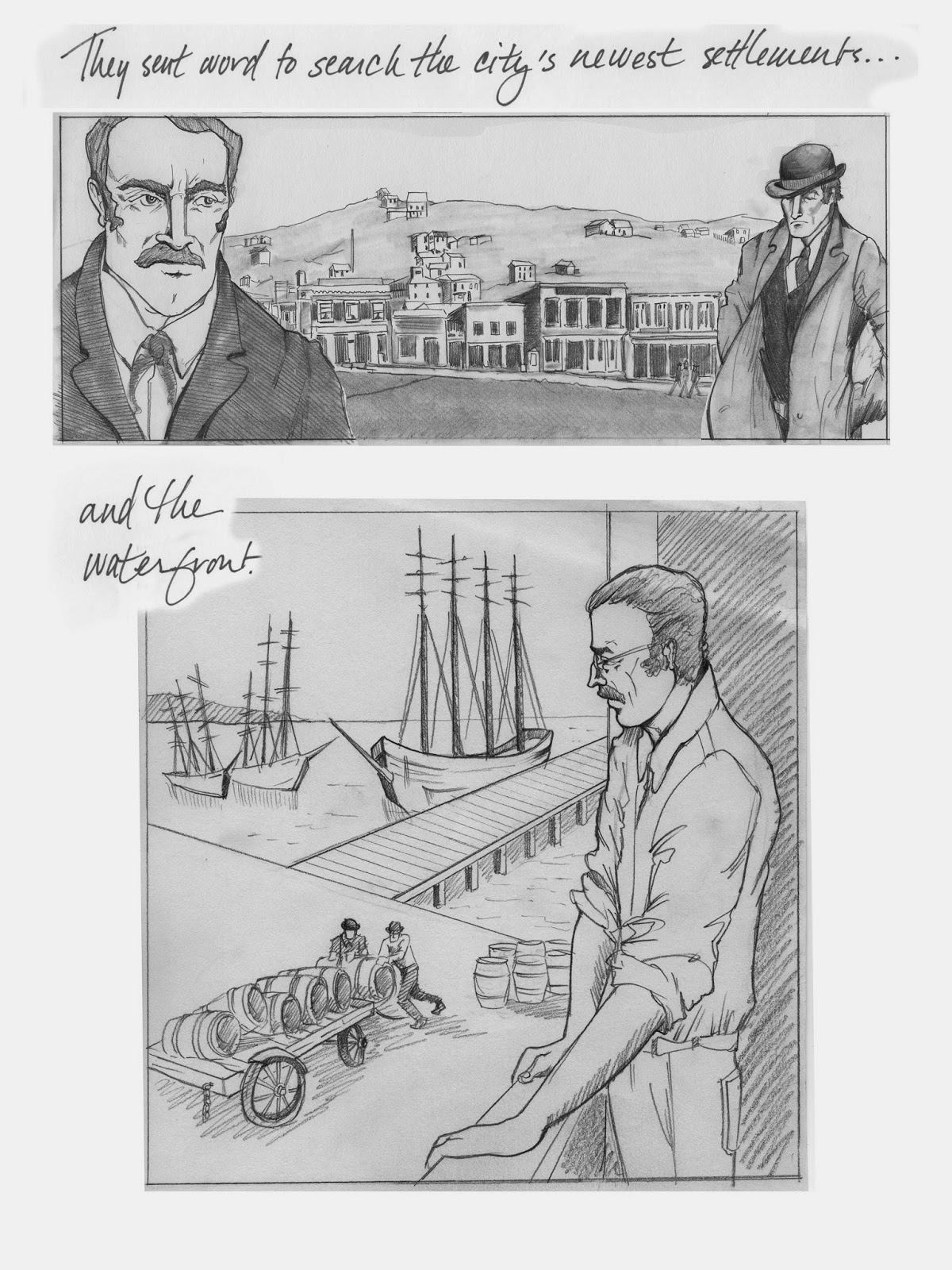 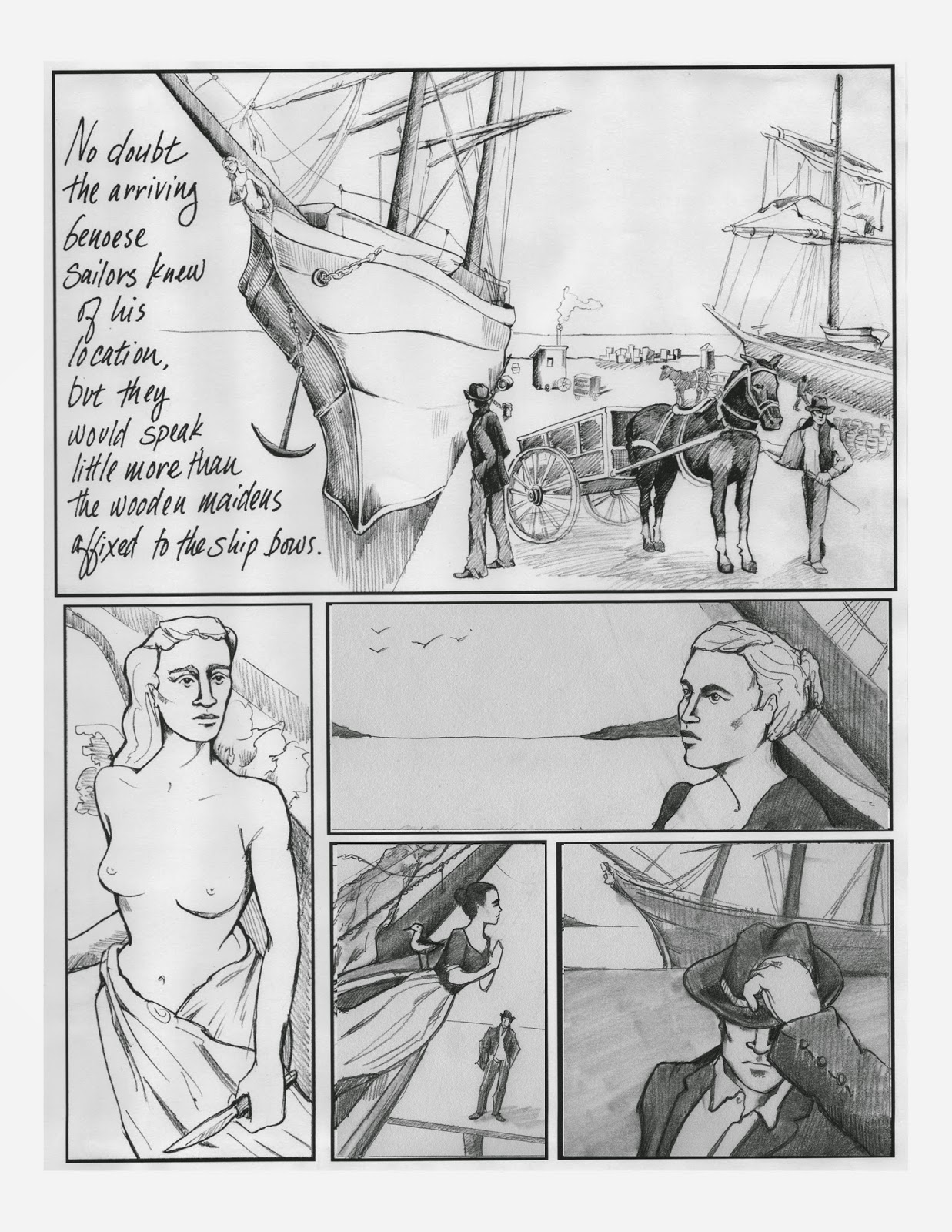 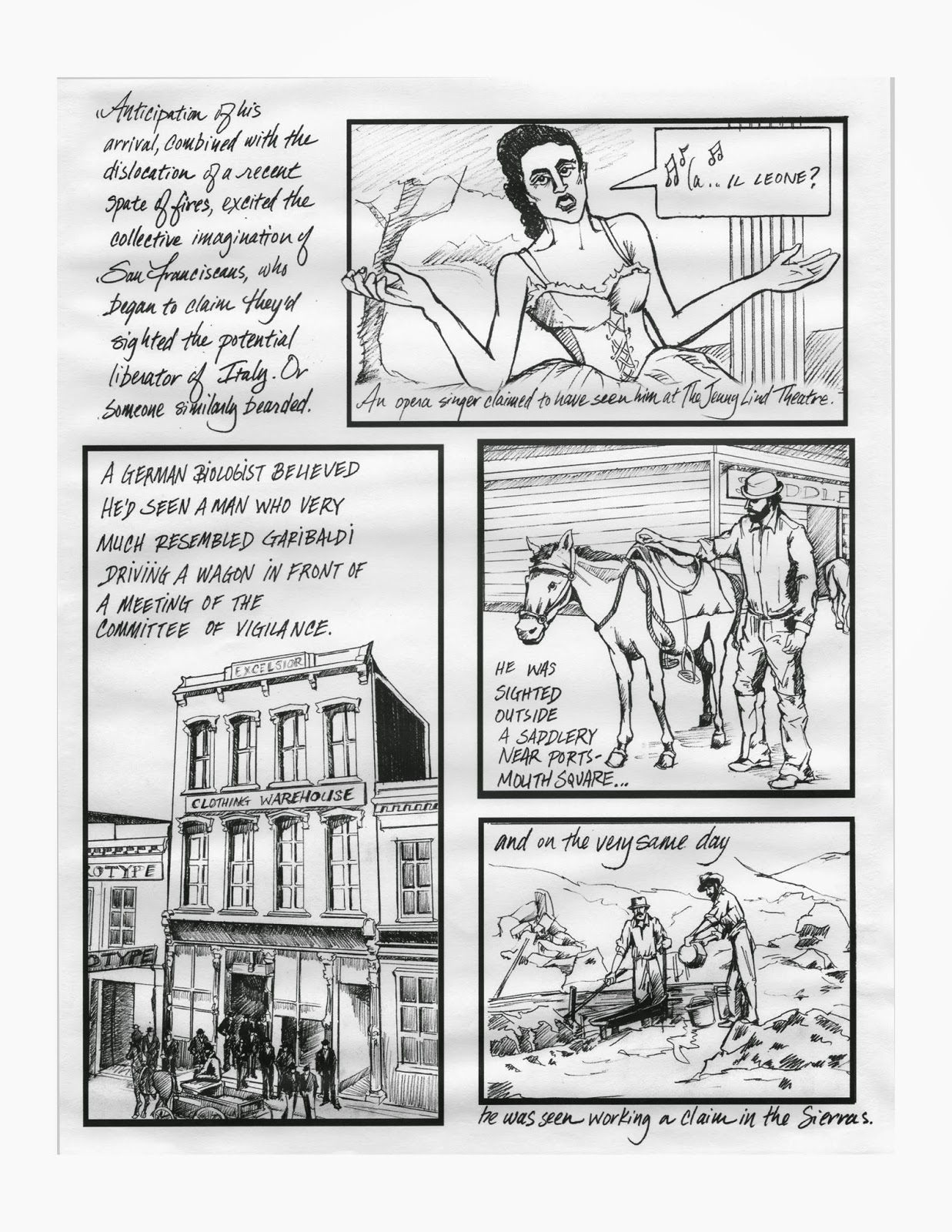 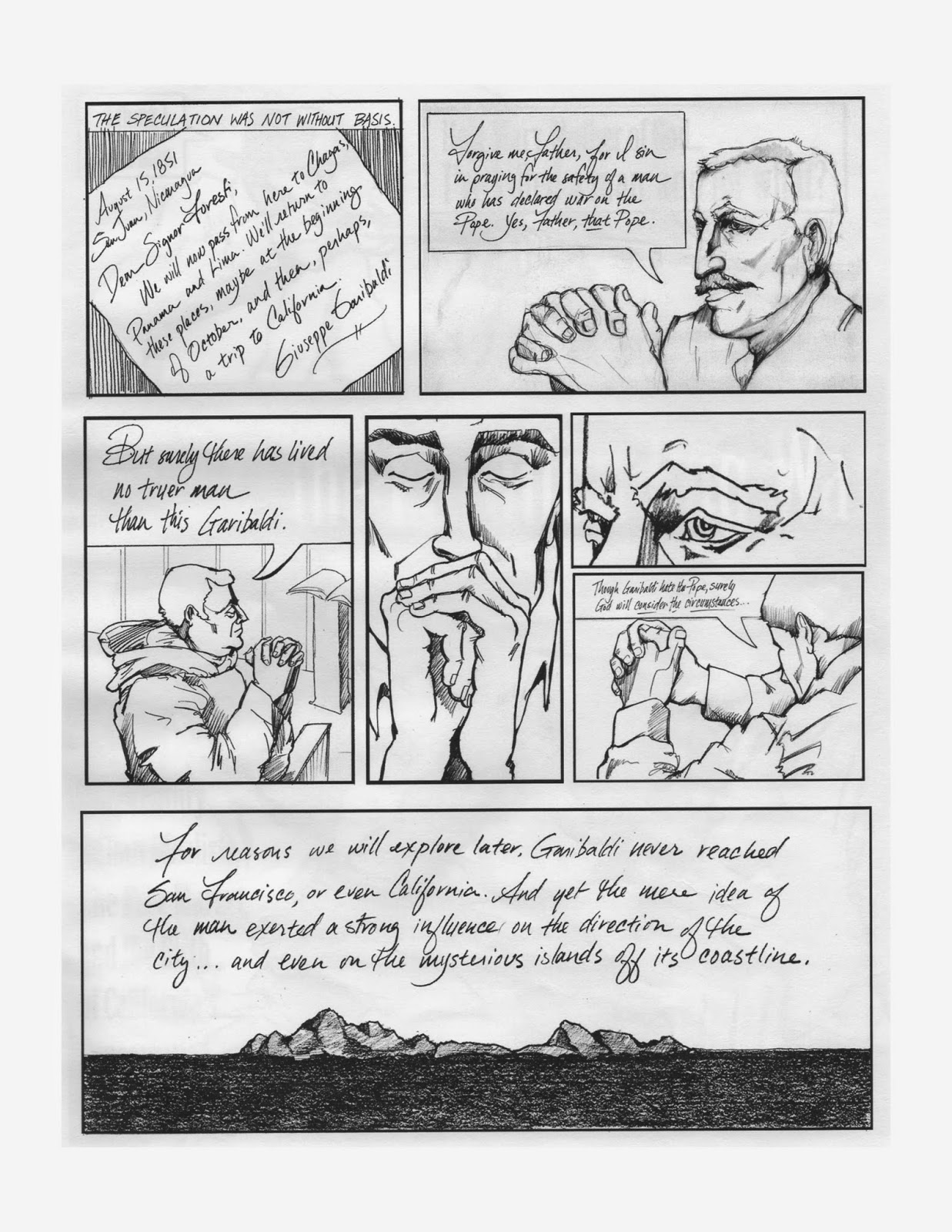 Posted by eva chrysanthe at 7:51 PM 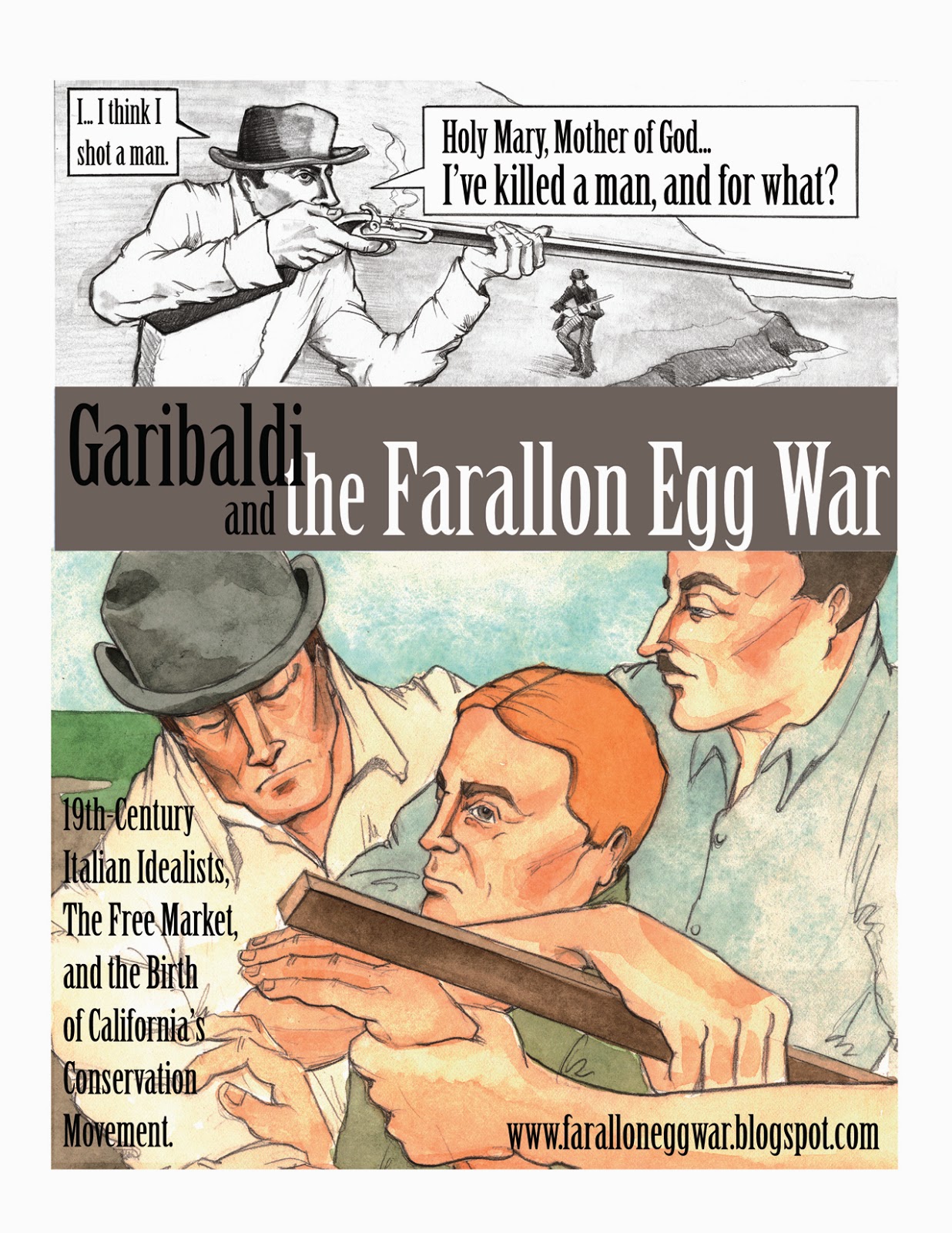 By now, we all know that the 19th-century poaching of murre eggs on the Farallon Islands was spurred by the lack of poultry - and thus a dearth of eggs - in San Francisco.  But few people have been able to explain why there was no poultry industry in San Francisco.

It's conceivable that all existing chickens in Yerba Buena had been consumed in the first year of the Gold Rush, given the arrival of tens of thousands of men to a town whose population had stood at only 1,000. But why was there no effort to restock the yards? Were chickens simply not hardy enough to make the lengthy sea voyage to San Francisco? If so, could no chickens be carried overland from Mexico?

Last weekend, I found a surprising clue in Sebastian Fichera's book, Italy on the Pacific: San Francisco's Italian Americans.  Fichera quotes from the correspondence of the failed Milanese businessman, Pier Giuseppe Bertarelli. I won't exhaust you with the tortured details of Bertarelli's seemingly endless business failures in San Francisco, but there is this:

"....neither Larco's largesse nor Grancini's arrival with the rest of their merchandise did anything to improve those deteriorating fortunes, and Bertarelli was now just barely keeping body and soul together from day to day. A three-month spell of waiting on tables was followed by a truck gardening venture, but when mice consumed his crop this too came to nothing. In April 1852, after escaping yet another fire, he made an auspicious start on a new scheme, raising and selling chickens at three dollars apiece. Though admitting, in his correspondence, that he was now spending most of his time looking through garbage dumps in search of feed for his chickens, he still scoffed at the idea that he would care about the effect of this news on his reputation back home. His new-world adventure, he wrote had already branded him a pariah to the sorts of people who would pass judgment on him...

"...the summer of 1852 seems to have been the high point of Bertarelli's California adventure. But it proved to be just another illusion: his unlucky star, this time in the form of a plague killing off all his chickens, caught up with him again and his resolve to stick it out began to falter. In his last letter, dated November 12, 1852, he accurately put his finger on the forces ultimately defeating both him and many others in the same position. "The only ones who do well here are the big corporations who wash the gold off the quartz," he complained. Pier Giuseppe Bertarelli set sail for Italy in the spring of 1854 never to be seen again in California."

So it’s not that there was a total absence of chickens. It was, rather, a serious shortage of chickens due to 1) a lack of feed and 2) the birds’ vulnerability to disease in a town where there wasn’t proper medical care and sanitation for people, let alone livestock.

Here's my Sunday morning sketch of Melville's great literary hero, Nathaniel Hawthorne. There's nothing like lying in bed in your sailboat with crackers and a cup of coffee, getting pencil shavings everywhere.

I have Hawthorne on the brain again, as the young women I work with are reading The Scarlet Letter for freshman comp. For the moment, they're struggling with the text, which I suspect is because they're being asked to start reading the book with the chapter "The Prison Door" instead of the funny and completely subversive "Introductory" in which Hawthorne 1) trashes all his eminent colleagues at the Customs House, 2) makes snide comments about the nascent federal government, and 3) backstabs his Puritan ancestors. So punk rock, that Hawthorne.

Oh, wait. That's probably why they don't let college students start with the introductory. It would be too much fun.

So I'm giving them an alternate reading supplementary to The Scarlet Letter: Catholic monk-turned-psychotherapist Thomas Moore's wonderful The Soul of Sex, which uses Hawthorne's Hester to explain how our competing American obsessions with sexual imagery and prudery are linked: both deriving from our failure to establish truly intimate, sensual relationships.

As you might imagine, intimate relationships were never a problem for Hawthorne, who had an intensely romantic, passionate relationship with his wife.  (And if everyone could do that, there'd be no divorce court.)  Hawthorne's brave Hester Prynne is prominently featured in Moore's book. And boy, does he nail Roger Chillingworth. Though at this point, I sometimes don't know who's more exasperating - Roger Chillingworth or Arthur Dimmesdale. Chillingworth is truly villainous, but Arthur is such a hypocrite. They're both so deceptive! But hey, no deception, no novelistic heroines.
Posted by eva chrysanthe at 12:33 PM

Below are some sample pages from the earliest version of the book, which was eventually rejected by Chronicle Books.  I might post the rejection letter a little later, it's actually pretty funny.

But first: All the trials of rejection put me in mind of the great iconoclastic historian and illustrator Jack Jackson (1941-2006), who had to drive all over Texas selling his graphic history novel out of the trunk of his car.  Here's a picture of Jack Jackson in 1979 outside Rip-Off Press, which he founded in San Francisco with his fellow Texans - it's R.O.P.'s second or third office, on 17th Street and Missouri.

God only knows for what ignoble "high-tech" purpose the building is currently used, but it once housed the press that printed the work of a real American maverick - Jack Jackson - an Anglo kid who grew up amongst Mexican-Americans in Seguin, Texas, and not only never lost sight of their joined history but had the tenacity to painstakingly research and record it in a novel manner.
The Rip-Off Press building is not that far from San Francisco's old Roxie Cinema, where, at approximately the same time as the above photo, I went as a grade-schooler to see Kurosawa's Siberian adventure Dersu Uzala (another true story which, like Jackson's work - and mine - concerns land use and capital.)
Later, as a teenaged bike messenger, I rode by the Rip-Off Press building hundreds of times with absolutely no clue what a giant had passed there before me.
Just the thought of Jackson having to drive all over his native, gun-happy Texas, walking up onto peoples' porches and trying to get them to buy his graphic history novel in 110-degree heat should give one pause.  But that was Jack Jackson, the coolest Texan who ever lived.

It's true - my work is pretty girlie compared to Jackson's fearless and muscular work, but to its credit it's also 90% less sweaty, as you can tell from the excerpts below: 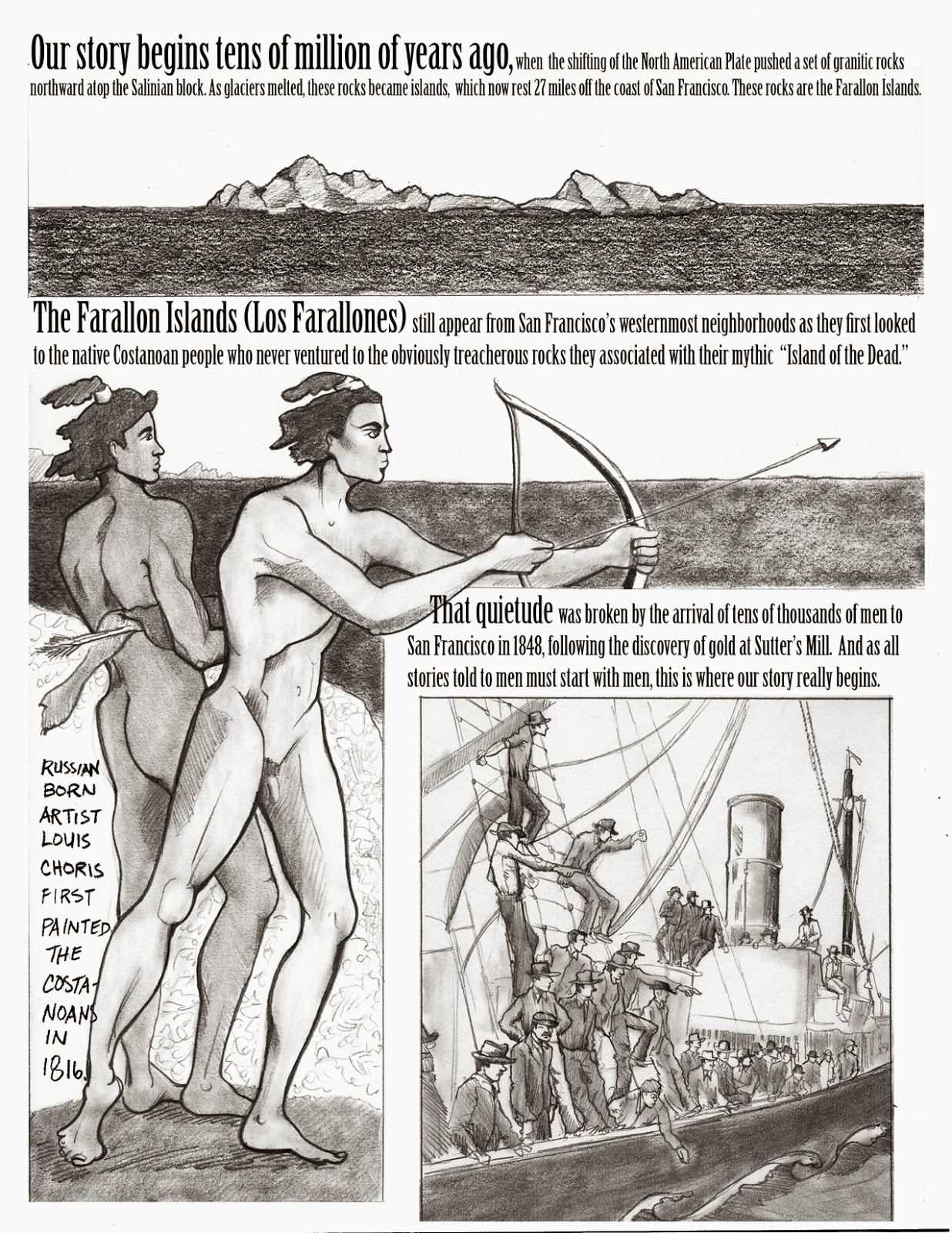 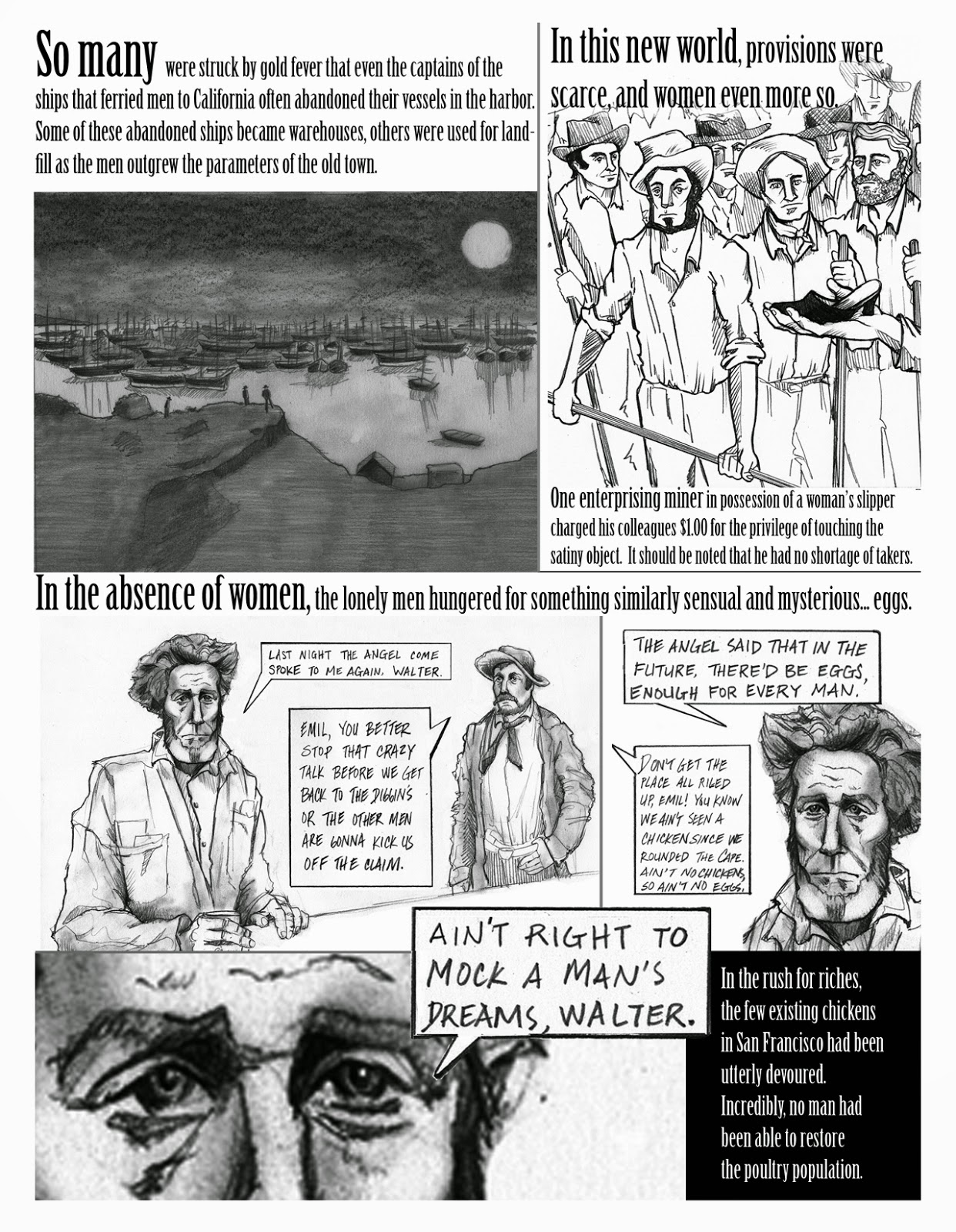 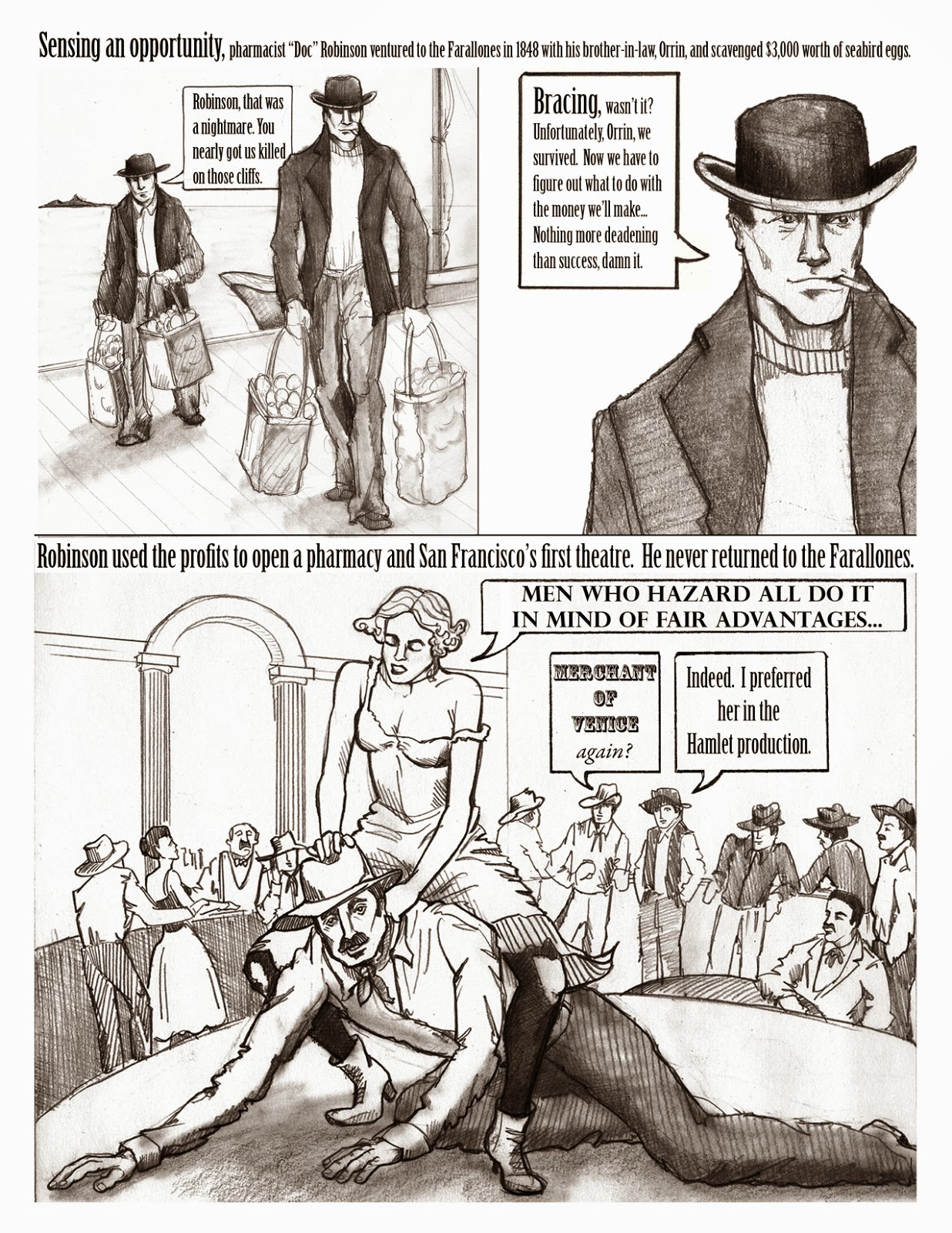 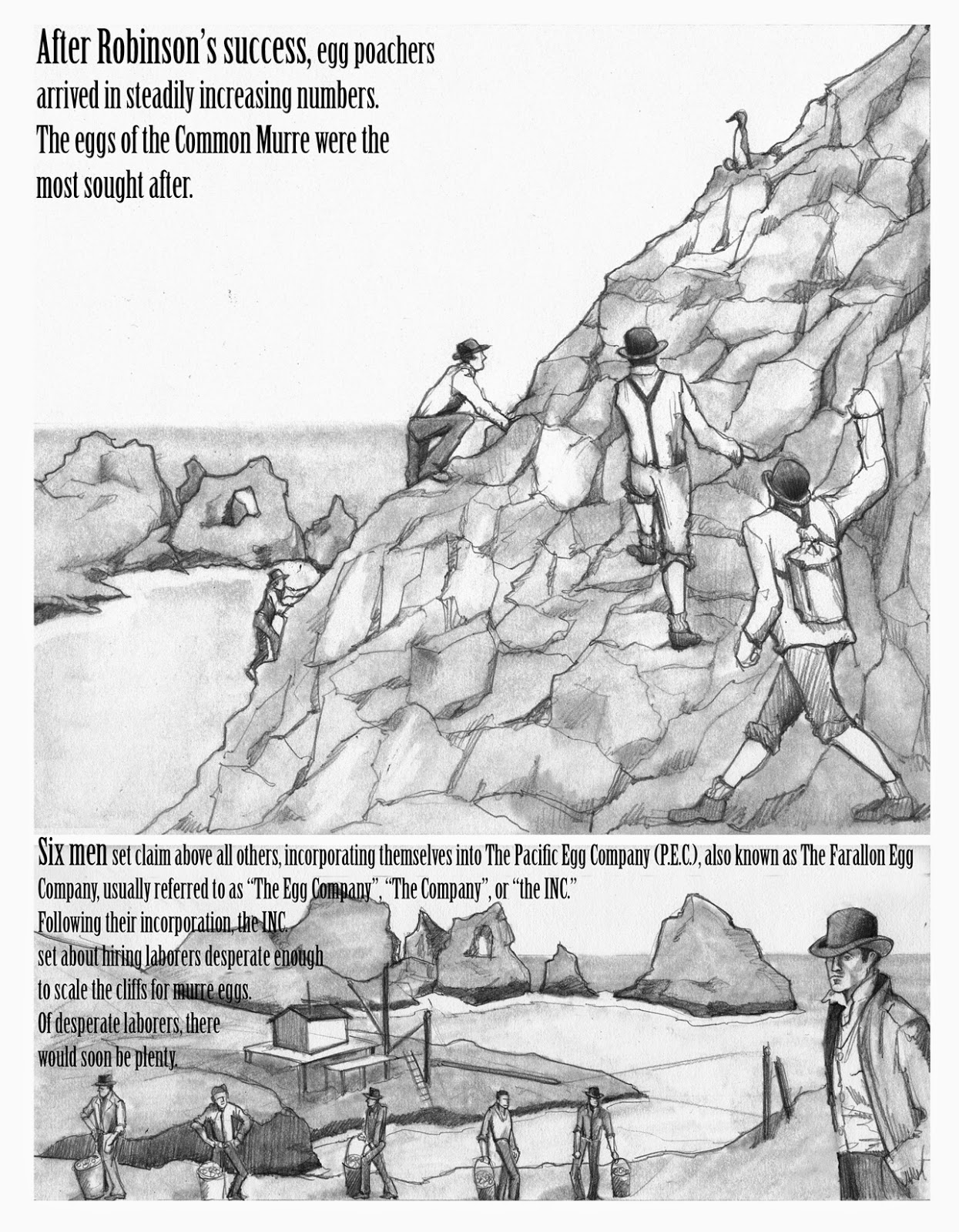 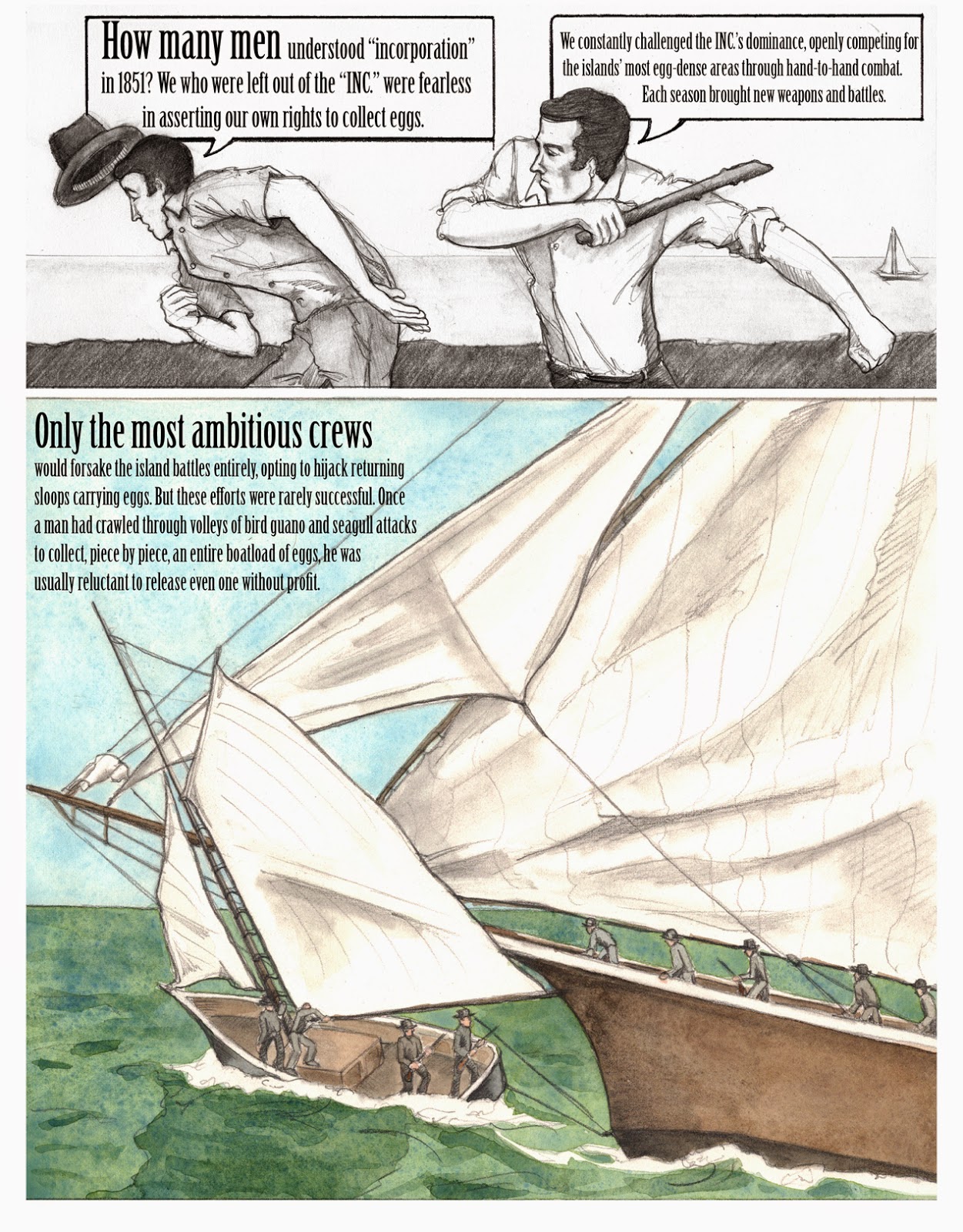 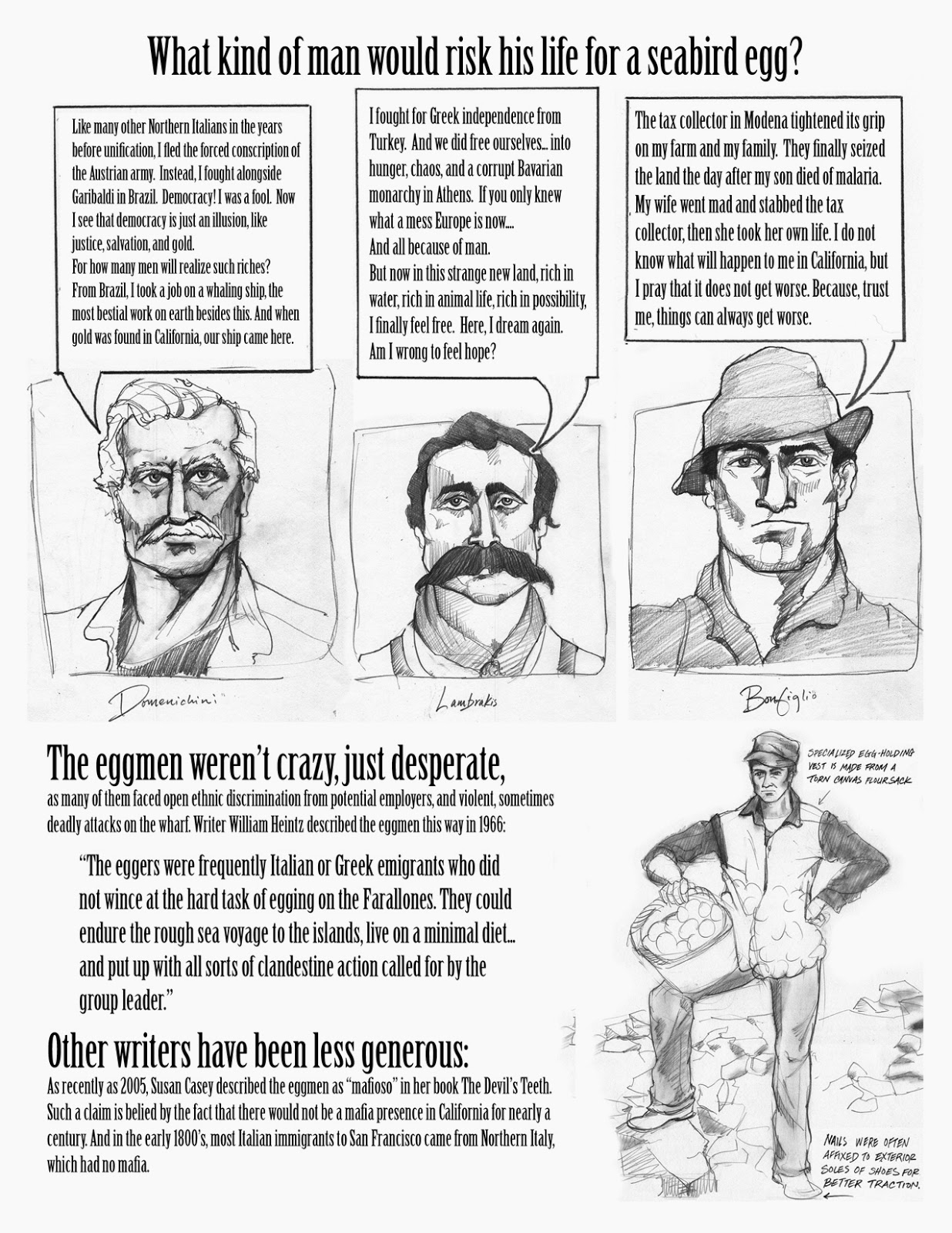 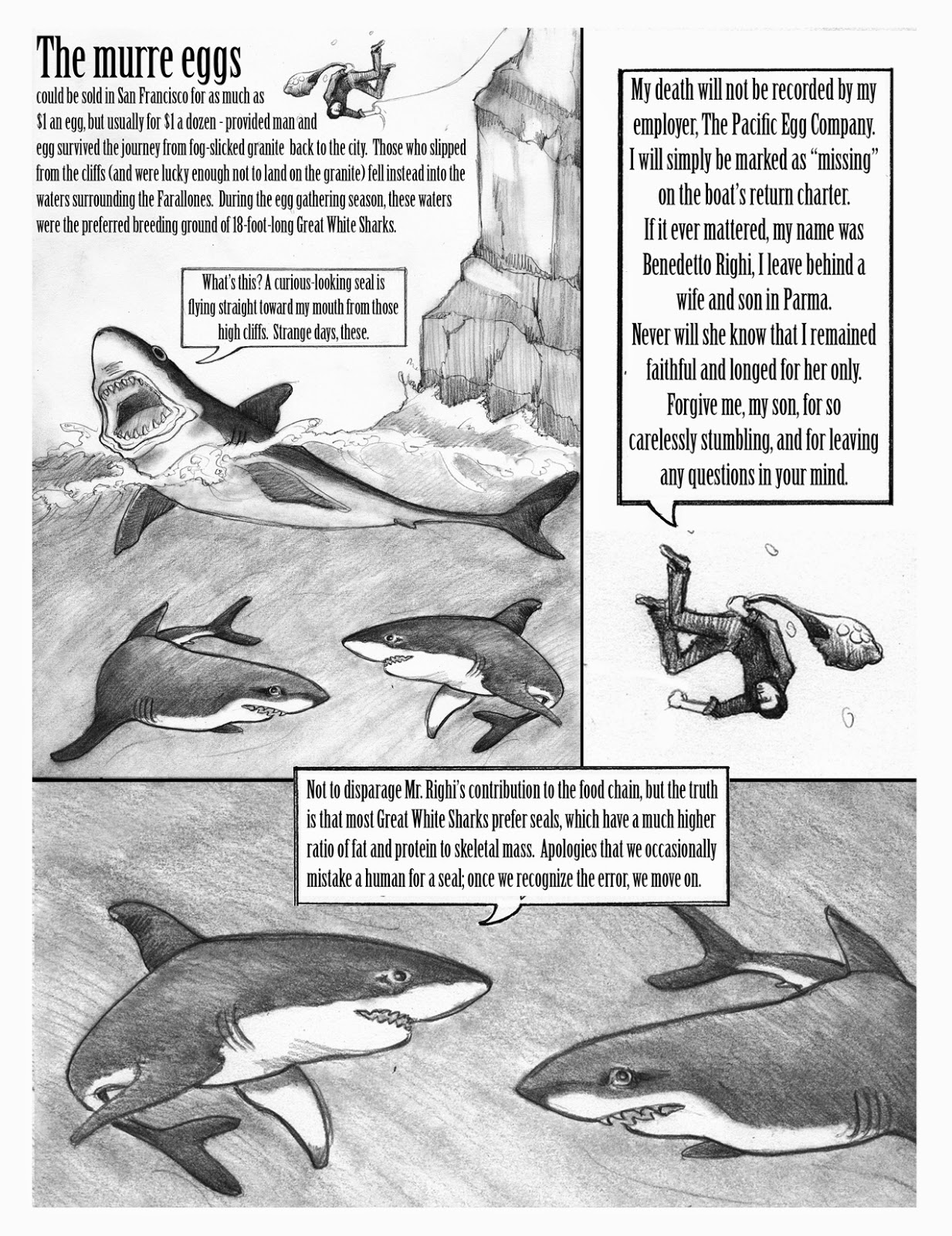 Posted by eva chrysanthe at 9:54 PM