You Don't Have To Be Italian To Want To Correct The Historical Record.... 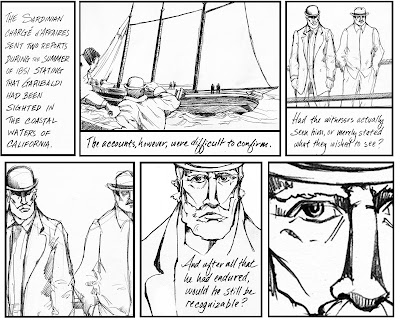 In the spring of 2010, I began research for a graphic novel about the 19th-century poaching battles on San Francisco’s Farallon Islands. The monumental devastation wrought by that poaching – and the deadly battles that ensued – eventually led to federal protection of the islands’ fragile ecosystem.

Many of the archival documents characterized the poachers as Italian immigrants with criminal backgrounds. And as recently as 2005, author Susan Casey described the poachers as “mafioso” in her best-selling non-fiction book, The Devil’s Teeth.

Yet the larger historical record shows that Italian immigrants in San Francisco had a lower crime rate during that era than their European and Anglo-American peers.  The archives also document their commitment to Giuseppe Garibaldi’s visionary ideals, including his pro-feminist, anti-slavery and anti-Vatican positions.

The weapons of choice in the Italian-American community of 19th-century San Francisco weren’t firearms or knives, but newspaper editorials and fundraising drives.

Would this population really be likely to risk their lives fighting other men for the privilege of collecting seabird eggs on the Farallon Islands? And how did their progressive ideals fit into the larger history of wildlife conservation in California?

Garibaldi and the Farallon Egg War attempts to answer that question by taking a panoramic view of the forgotten progressivism of 19th-century San Francisco – and its obverse. From abolitionist Italian aristocrats to groundbreaking amateur scientists to French arms dealers to the desperate skirmishes on the Farallon Islands, the question is asked: If we had fulfilled Garibaldi’s goal of taking greater care of mankind, would mankind then have taken greater care of the wild?

My illustrated reports have previously been published in The New Yorker Magazine, The New York Times Magazine, and The New York Observer. Over the past year I have compiled a truly unique set of historical documents regarding both the Farallon battles and San Francisco’s 19th-century community, which serve as the basis for the graphic novel’s narrative.  An earlier version of Garibaldi and The Farallon Egg War was warmly received in its debut at the California Academy of Sciences in October 2010, and at The Randall Museum in August, 2011 as part of their Natural History Lecture Series.

Posted by eva chrysanthe at 1:00 PM