A major player in the emerging city of San Francisco was Joseph Yves Limantour, a successful trader from Breton who held deeds from the outgoing Mexican governor of California showing that he owned Angel Island,  Alcatraz Island, The Farallon Islands (Los Farallones), and all the land in San Francisco that was then south of California Street.

It was, in fact, a pre-Gold Rush shipwreck that had first stranded a younger Limantour in San Francisco. Stuck with a cache of luxury goods, Limantour negotiated a fortuitous series of swaps among the region’s original Spanish settlers, the Californios, and savvily befriended William Richardson, the onetime Port Captain of Yerba Buena under Mexican rule.  The beach on which Limantour’s  ship ran aground is almost as serene as when he first arrived, and still bears his name. It did not hurt that Limantour was able to charm the wives of the Californios, who were nearly mad with boredom.

(Click on the images below to expand. Try not to think about the fact that I've totally misrepresented the historical munitions - I'm working on it!) 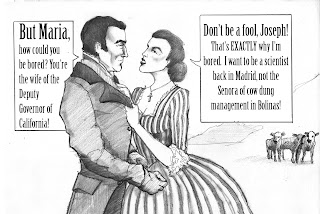 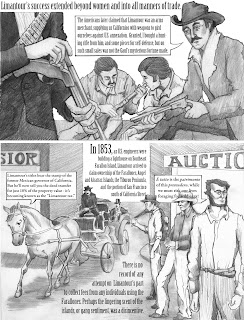 Posted by eva chrysanthe at 3:33 PM